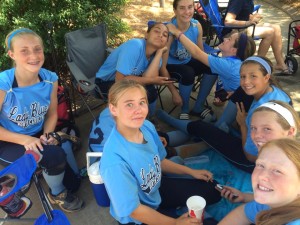 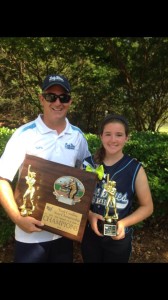 From June 26th through June 29th, the Lady Blues Fastpitch softball team played hard and well to win the NSA Big Wave Tournament in Wilmington, North Carolina.  Coach Bill Baylog is proud of the hard work, team play, and determination that brought the Lady Blues the victory.  One example of the players’ determination was team member Sydney’s performance.  She pitched 4 straight games in a row in heat and humidity when pitcher Gabby fell ill for some of the tournament.

The athletes played a total of 8 games to take home the first place hardware.  The tournament got underway with very warm tempatures, and ended with the Lady Blues batting in 6 runs over the TFS Storm team bringing in 3.

Next was the team’s only loss in the tournament.  Yet even this contest served to highlight the team’s strong will.  The Lady Blues were trailing the Carolina Mayhems 5-0 after the first inning.  Coach Bill Baylog said, “We battled back and came up a little short,” ending with a score of 6- 5, in the Carolina Mayems  favor.

The next three games were won by the Lady Blues: (Lady Blues 5, Team Worth NC 2),  (Lady Blues 5, Holly Springs Thunder 0), and (Lady Blue 10, Charlotte Blaze 0).  A  rain delay pushed back the next game,  but this did not stop the winning streak (Lady Blues 3,Port City Thunder 0).  An “awesome game (played) defensively by both teams” is how Bill Baylog summed up the last game before the championship match.  Lady Blues pulled the win, scoring 1 over Richmond Diamonds 0.

Finally the Lady Blues met the Richmond Diamonds again, triumphed with a 3-2 final score, and walked off the field the ultimate winner of the NSA Big Wave Tournament.  Congratulations to the athletes!

Next play is July 11-13th at the ASA South Atlantic Summer Showdown in Easley, South Carolina.