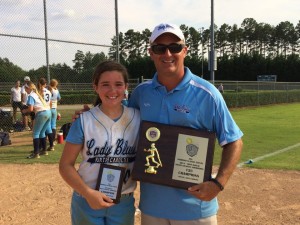 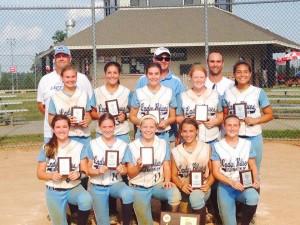 The Lady Blues left yet another fastpitch softball tournament laden down with championship hardware!

Over this past weekend of July 11th – 13th, the Lady Blues won 8 games and lost 1 at the ASA South Atlantic Summer Showdown in Easley, South Carolina.  The heat was on, both literally and figuratively, as the athletes played game after game in the summer heat.

The first two games were 8-0 (Palmetto Poison) and 11-1 (Carolina Crush).  The third went into extra innings but ended with the Lady Blues on top, 3-2 (Carolina Elite).  Next up was our only loss, with the Black Widows pulling out the win 3-2.  Off to the loser’s bracket the team went, only to surge undefeated through the rest of the challenge.  Specifics are 6-0 (Upstate Synergy), 12-2 (Carolina Crush), and 6-2 (Black Widows).

To earn the championship title, the Lady Blues had to win twice.  The first of those games was 7-3 (Thunder Cats) and we knew “anything could happen” next.  The hard working Lady Blues played for the win and took the top title by beating the Thunder Cats 1-0.  The girls showed a great defense and a teamwork that kept the team moving in the right direction.  We are all proud of this team.

One more scheduled play for this (amazing) season:  The ASA World Series July 21st – July 26th to be held in Spartanburg, South Carolina.